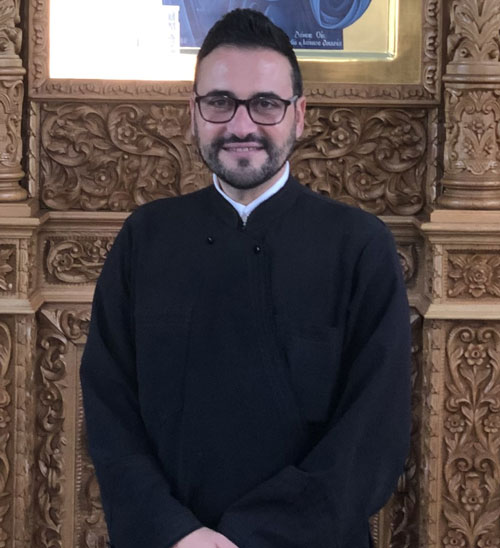 Father George Anastasiou was born in NYC in June of 1975. He graduated from JFK High School and continued his studies at City College of New York and the Higher Ecclesiastical School of Athens. Returning from Greece he attended Hellenic College Holy Cross , where from he received his BA and MA degrees. He continued his academic studies at St. Vladimir's Seminary and Fordham University where he studied pedagogy and teaching Social Studies.

From 2001 to 2004 he worked as a public school teacher of history and social sciences for the NYC Department of Education. In 2004, when he was ordained, he served at the Cathedral of St. Demetrios of Astoria and in 2010 he was appointed to the Parish of Transfiguration of Christ in Corona, N.Y. In 2019, Father George joined Holy Cross as the parish priest.

Father George is a graduate of the NYPD and FBI Citizens Academies and serves as a chaplain for the NYPD. In addition to his daily pastoral responsibilities, Fr. George hosted a talk show on Hellas FM entitled Spiritual Breaths.

Father George has worked closely and intimately with political and civic leaders through his involvement with the Faith Based Working Group on Finance of NYC Council Speaker Christine C. Quinn, the PBQN Citizens Police Academy Alumni Association, Faith in New York and the Association of Christian Clergy of Astoria and Long Island City for Immigration reform. Father George is married and has three children.